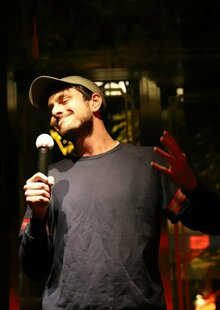 The organizer's data is in the "Brought to you by" section.

Unapologetically honest and hilarious, this show is not for the easily offended. If you like silly, dark and mischievous storytelling that examines, sex, relationships, happiness, this show is for you.

at The Comedy Clubhouse

The show will be held entirely in English, will be held indoors and follow current social distancing guidelines. Therefore, we are only able to have a limited number of tickets. Please reserve a seat in advance.

Before the pandemic Mike regularly headlined clubs around Ireland and Europe including City Limits (Cork), The International (Dublin), and The Comedy Crunch (Dublin). Mike has performed stand-up comedy twice on Irish National television (RTE) as Part of ‘The Ray Darcy Show’ (Dec 2019) and ‘Laughter in the Eyre’ (Feb 2020), and has featured several times on RTE Radio 1’s Ray Darcy Show. Mike brought two separate solo shows to the Edinburgh fringe festival in 2018, and 2019, and the Perth Fringe Festival in 2019, and 2020.

He have a successful podcast called “The Mike Rice Show” which has been existence since November 2019, and is regularly ranked on the Irish and UK podcast charts

Review: Mike Rice: An Irish Disgrace!
Thanks to the Comedy clubhouse for hosting, we had a great time!
Romain
Ms
Very good show, I enjoyed all the comedians - my face is still sore from laughing !
Irene
Underrated!
Ended up here quite randomly to finish a birthday day out, and couldn't have been better. All the comics were hilarious and catered to an international audience perfectly, in a brilliant little tavern Read more venue. Keep up the amazing work guys!
Andrew