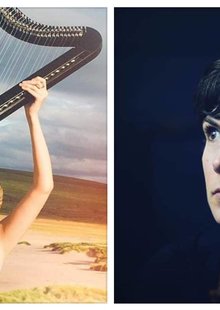 Singer and harpist Rachel Newton specialises in interpreting traditional folk songs in both English and Scottish Gaelic as well as writing and performing her own instrumental pieces. Rachel performs solo, with her trio featuring Lauren MacColl on fiddle and Mattie Foulds on percussion and with a full band when they’re joined by Michael Owers on trombone and Sarah Hayes on keys.

A skilled collaborator, Rachel is a founder member of the successful UK folk bands The Shee and The Furrow Collective. She also plays fiddle and viola and works across a range of performance platforms including theatre and storytelling.

‘An album that enthrals and entrances, places traditional song under a fascinating new spotlight and confirms Rachel Newton as one of our most original and gifted interpreters of those traditions’ Folk Radio UK

2017 BBC Radio 2 Folk Award winner Lucy Farrell is at last embarking on the solo career so many have been hoping for, since first hearing her exquisite renditions of traditional ballads and quietly moving original songs. Lucy’s new solo album will be released at the end of January 2018 on Hudson Records and will be accompanied by a UK tour.

As one fourth of The Furrow Collective, Lucy is the current recipient of the Best Group prize following the release of their widely acclaimed Wild Hog LP, earned during an immensely busy and creative time in which she contributed to the raved about return to form that was the Eliza Carthy & The Wayward Band’s Big Machine album and tour, and also saw her final shows with the Emily Portman Trio with whom she’d sung, sawed and played viola for many years.

Lucy Farrell first enchanted fans of traditional music when she began performing as a duo with fellow Newcastle Folk Degree graduate Jonny Kearney. Invited to become the regular opening act for The Unthanks, Lucy & Jonny’s blend of wry and lovelorn tales with exquisite interpretations of English, Scottish and American ballads saw them frequently outselling the headline act at the CD stall.