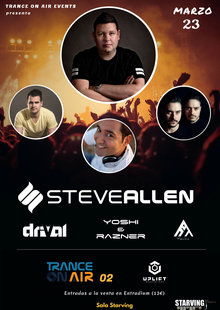 Trance On Air events hosts their second event with a massive both national and international trance lineup, highlighting the headliner who is no other than one of the scene leaders and legends: Steve Allen.

During Steve’s time as the producer and DJ within the project ‘Allen & Envy’, Steve managed to create a number of global hits including ‘Silhouette’, ‘Stole The Sun’, 'Don’t Say', ‘Home’, ‘Rush’, ‘Rescue Me’ and ‘Kardia’. He created regular music for Armada, Black Hole, Future Sound Of Egypt, Garuda, Flashover, Pure Trance and his trance has been championed by the likes of Armin Van Buuren, Aly & Fila, Paul Van Dyk, Solarstone and countless others.

Now as a solo act, Steve’s debut solo album “Uplift” released on his own label of the same name (a sub label of Raz Nitzan Music), topped 2.4million Spotify plays, and he has produced countless chart topping hits such as “Broken Child” “Frozen River” “Skyfire” and his collaboration with Paul Van Dyk “Fairytales” featured on Paul’s “from Then On Album”

Along with Steve, we will welcome to the decks other artists such as Drival, who has released music on Raz Nitzan Music, AVA Recordings, Universal Nation to name a few and got support by Armin van Buuren, Andy Moor, Mike Push and more, Yoshi & Razner, the upcoming Spanish duo that had a strong debut on Tangled Audio, and also Rubén Trías, the talented DJ who hosts his regular show Culture Of Trance, will round up a wonderful trance night in the capital of Spain.

See you there, trance family!!