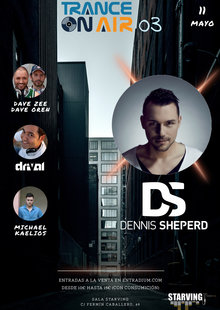 Trance On Air events hosts our third event with a blasting trance lineup. This time we are welcome to bring to the stage as the headliner... Dennis Sheperd!

Having achieved nearly every accolade associated with the elite, German producer and DJ Dennis Sheperd has broken through the scene as a staple to his fans and colleagues alike. The Berlin-based Trance and Progressive enthusiast is ready to take the lead and spring forward with innovative ideas, genre-bending music and a relentless amount of energy.

Next to being in high-demand for his remix skills, having remixed tracks for Armin van Buuren, Above & Beyond, Gareth Emery, tyDi and Markus Schulz, he’s fostered an impressive list of vocal collaborations as well. Christina Novelli, JES, Ana Criado, Sylvia Tosun, Lady V, Jonathan Mendelsohn, Katty Heath and Molly Brancroft are just some of the talented musicians that have been part of the musical story Dennis has created.

Sharing his original works is one of things that drives Dennis to travel the globe and meet his fans. Spinning his unique blend of Progressive Trance in no less than 28 countries, he has been able to play at many of the best festivals and clubs around the world including Ministry Of Sound in London, Exchange Club in Los Angeles and the A State Of Trance festivals.

Along with Dennis, we will welcome to the decks other artists such as Drival, who has released music on Raz Nitzan Music, AVA Recordings, Universal Nation to name a few and got support by Armin van Buuren, Andy Moor, Mike Push and more, Michael Kaelios, the talented Spanish trance producer who has released music on labels such as VII, Grotesque or FSOE to name a few, and also Dave Zee & Dave Oren, the great duo of DJs responsible for the Princedom Of Trance show that is broadcast via FB Live, YouTube, Mixcloud and iVoox with followers all across the globe.

See you there trance family!