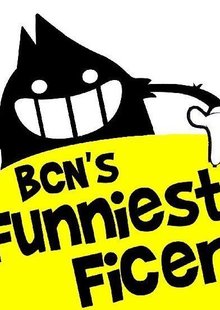 They began as 27 and over 3 Heats each producing 3 finalists leaving the 9 best to slog it out for the chance to win the support slot on the massive stage that is Teatre Borras supporting one of the greatest legends of Stand Up in Rich HALL on the final show of the festival and €500 worth of Stoke Travel festival vouchers and probably most important the right to refer to themselves as BCN's Funniest FICer for the next year.

There can only be one!!

Spain's premier English language comedy competition, one of the most important events on the Barcelona comedy calendar, now in it's 8th edition!

Over the years these heats have produced some of the best nights of comedy in the city, with comedians and audience alike giving their all o create a truly electric atmosphere.

Estupendo
El sitio tiene fascino y el espectáculo muy bueno!
Diana
Funniest Ficer finals 2019
What an incredible night of comedy! The Funniest ficer finals is one of Barcelona's highlights!
Stephanie Figueira
Awfully organized
Didnt get checked for tickets coming into the place and we arrived at 8.27pm. Show didn't start until about 9.20pm (thanks for that) and then was more or less shouted at for not having shown our ticke Leer más s. Most of the comedians were actually quite good - we enjoyed that part. Didn't enjoy arriving into a stressful atmosphere. Also the MC Chris was just cringe-worthy not funny. Telling Spanish people that their english is "shit" is just obnoxious and rude. Never again.
Ian
great show
great show, great work by all 27
Mike