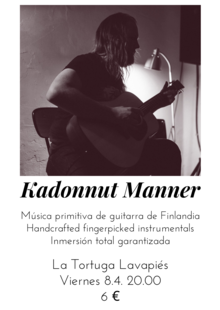 Kadonnut Manner is finally doing his fifth European tour from March to early June 2022. The long overdue tour is in support of his album "Finnish Primitive Guitar Vol.3" (Jukan Musiikki / Hillotehdas / Creative Class War CD/LP/DL) that came out in August 2020, and will hopefully help with the withdrawal symptoms from playing live shows and travelling. He will be performing at La Tortuga on Friday 8.4. at 21.00.

Kadonnut Manner's hypnotic, raw, and cinematic instrumental music invokes vivid imagery in the heads of those who hear it faster than any chemical would. The music draws its influences from John Fahey school of American Primitive Guitar playing, country blues of Skip James and Mississippi John Hurt and Finnish folk music, but it doesn't require any prior knowledge from the listener, only an open mind.

Lauri Manner (b. 1983, Suomussalmi) is a finnish musician and sound engineer, who started out in the 90's playing bass in various finnish underground punk and rock bands. He started his journey in fingerpicking acoustic guitar in 2015 after listening to John Fahey records obsessively for years. More than 230 live shows and 3 albums later this (ex-?)punk rocker has more than enough experience to execute his ideas proficiently, but without losing the rougher edges of self-learnt musicianship and do-it-yourself spirit.