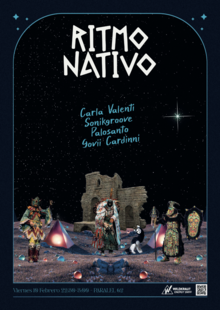 Carla Valenti:  Chilean DJ based in Barcelona. She has released several tracks on labels such as: LNDKHN, Basy Tropikalne, Global Barrio and La Chimba Discos and also has participated in various compilations for labels such as: Abracadabra, New Latam Beats, Shika Shika, Tropical Twista and Casa Caos among others. She participated as a music producer in the Musikplatz platform (Berlin) in Mexico City, representing Chile.

Sonikgroove: Originally from Bogota, now Barcelona-based, Sonikgroove is a music producer and DJ whose sound blends together organic elements of traditional Afro-Latin folklore with electronic music, creating timeless and exotic soundscapes. In his sets, he breaks borders, taking the listener on an unpredictable journey around the world with his delicate way of linking cultures through music. Playing with a wide and colourful variety of genres, he spontaneously shapes the dance floor mood into a vibrant celebration.Throughout his career he has performed in various venues, clubs, cultural centers and festivals around Europe and Latin America, highlighting festivals such as: Tribal Gathering (Panama), Borgo Universo (Italy) and Own Spirit (Spain).

Palosanto: Is an explorer of world music sounds and its many electronic facets. Dj, producer, and founder of label Mamboz Records, In his sets he mixes traditional, roots and folk music from every corner of the globe with electronic beats.

GoviiCardinnni (VJ): Is a multidisciplinary artist based in Barcelona. His video mapping projects complement the DJ by generating an audiovisual experience. As a source of inspiration he draws on sacred geometries, astral travel and symbiosis with exquisite organic forms. His particular worldview makes his style a spectacle of color and hypnotizing forms that transport the viewer to dreamlike landscapes.